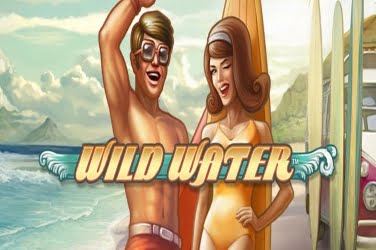 Players will think that they have been transported back to the 1960’s with this online slots game. It is themed around a Pacific Island and the reels are set within a wooden frame. In the background, there is a sandy beach, palm trees, and even a hippy VW camper van to add to the laid-back Surfer lifestyle.

This is a 5 reel slots game which has 20 winning paylines. With stacked symbols, Wilds and Scatters it is engaging and fun to play. Free Spins, Multipliers, and 2x additional Bonus Features ensuring that it is appealing to players of any level who enjoy online casinos.

The soundtrack that plays during the game may remind gamers of old tracks released by the Beach Boys. However, the cries of “awesome”, “radical” and “cowabunga” whenever a winning combination is found could be a little cheesy for some. But there is a Settings Button on the Control Panel at the bottom of the screen so that volumes can be altered or turned off if the player prefers.

When there is a winning player can also enjoy some cool graphics as a wave splashes over all the symbols that were involved in the pay line. This adds to the theme and the atmosphere that has been created.

Net Entertainment has used old style graphics in the game’s design and unfortunately, this particular release isn’t available on Mobile devices. Yet there are still numerous players from around the world who are still enjoying the Wild Water slots game.

5 Surfer’s wearing 60’s style swimming costumes are the main symbols in the game. They are in colors of Red, Blue, Yellow, Green, and Orange and are seen in different poses. All of them are stacked across the 5 reels and offer players more opportunities to create a winning combination.

A Shark symbol is used as the Wild in the game. When this appears on the reels it can change other symbols besides the Scatter. Thus meaning that further amounts can be added to the final jackpot balance.

There is a Surfer taking to the waves which are shown as the “Scatter” symbol. At least 3x of these will reward players with 15x Free Spins. This is increased to 30x and an amazing 60x respectively should more of these icons appear across the reels. During this stage of the game, the players will also find that any Wilds that are spun become stacked if they are included on a winning payline.

If any combination of the main characters fills the reels of the screen then the Surf’s Up Bonus is activated. Here players are awarded a 20x Multiplier being added to their payout figure.

However, should the full group be spun together then the Surfer Team Bonus Feature will be given. Players can then benefit from an even higher cash prize of 200x the amount they first place. It can prove hard to reach this Multiplier but it is something that is making the Wild Water slots game popular with those who have a larger budget.

Net Entertainment has allowed up to 10x coins on each of the 20 winning paylines. But by keeping the denominations ranging from 0.01 to 5.00 it is an online casino game that is proving appealing to both high and low rollers.

The format of the game has been kept simple so it can be ideal for beginners who wish to travel to the sun and sea of the Pacific. Watching the Surfers fill the 5 reels while their jackpot balance increases with each winning combination.

Though there are no Progressive Jackpot included players can randomly find the Surf’s Up Bonus and Surfer Team Bonus Features throughout the game. Meaning that players can receive either 20x or 200x Multipliers added to their winnings.

Players can also find a Shark Wild and a Scatter symbol that will allow up to 60x Free Spins depending on how many appear. All of these Features provide lots of entertainment for players to enjoy during this online slots game.

Should players need to be less interactive with the Net Entertainment software then there is an Auto Play option available? This means that the reels can be set to spin automatically for either a certain amount of times or until the wager placed is reached.

Whatever budget the player may have there are various opportunities to win in the Wild Water slots game and plenty of fun to be had throughout. And with an RTP of 96.40% it is attracting many who want to maximise on their initial stake. 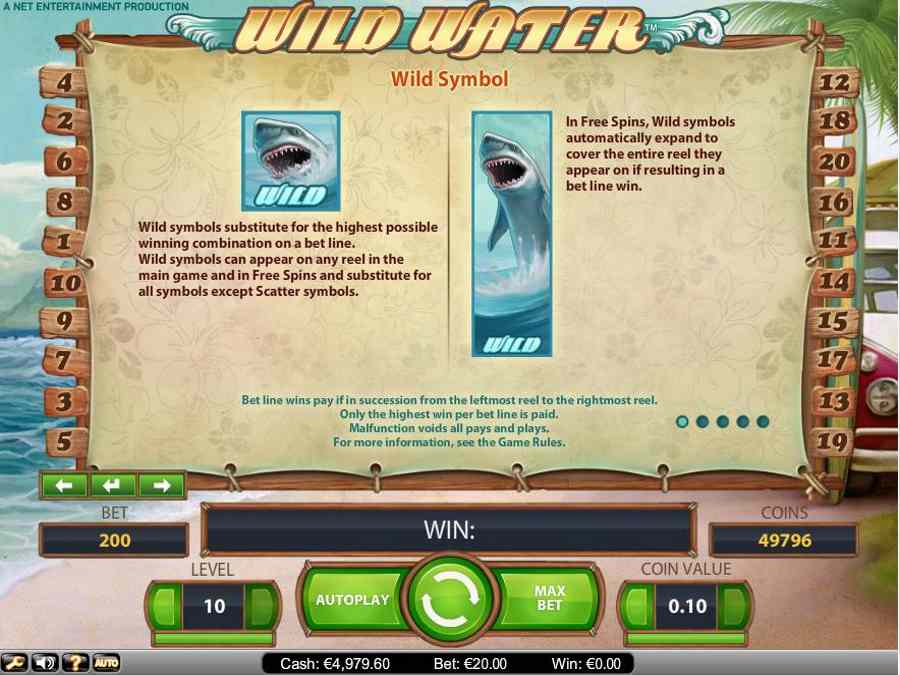 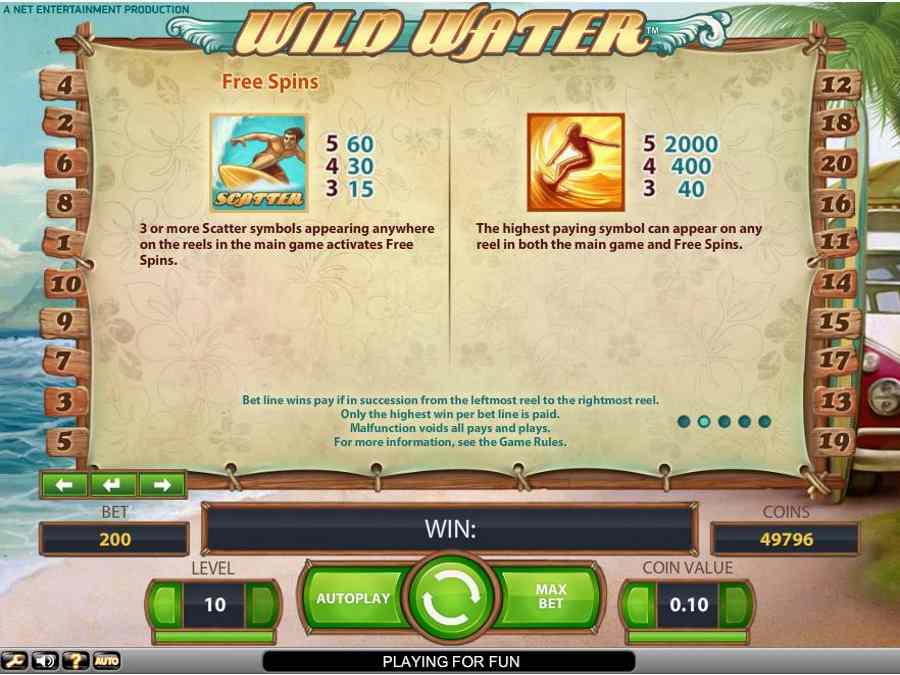 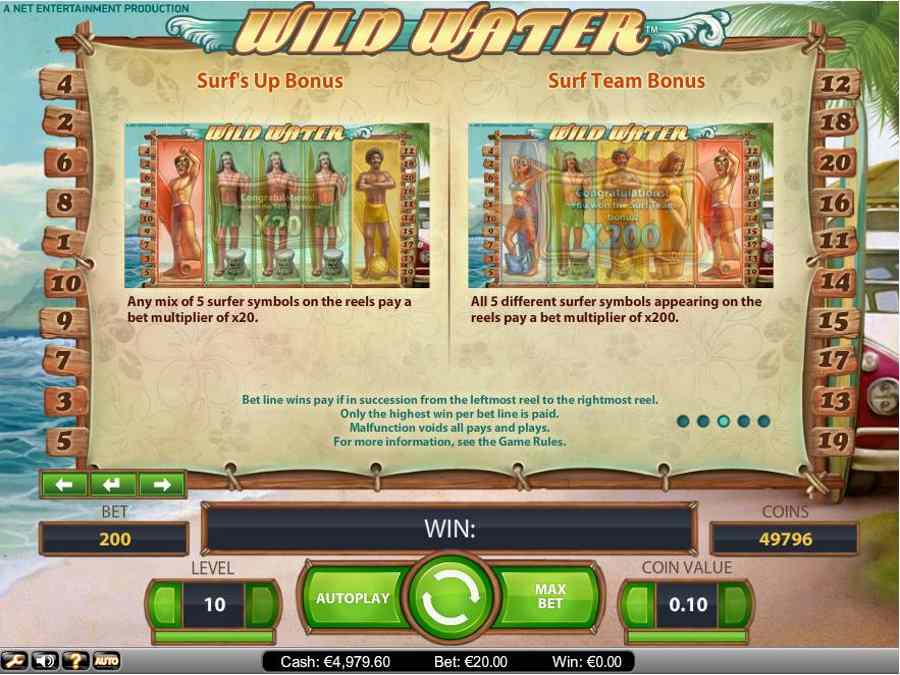 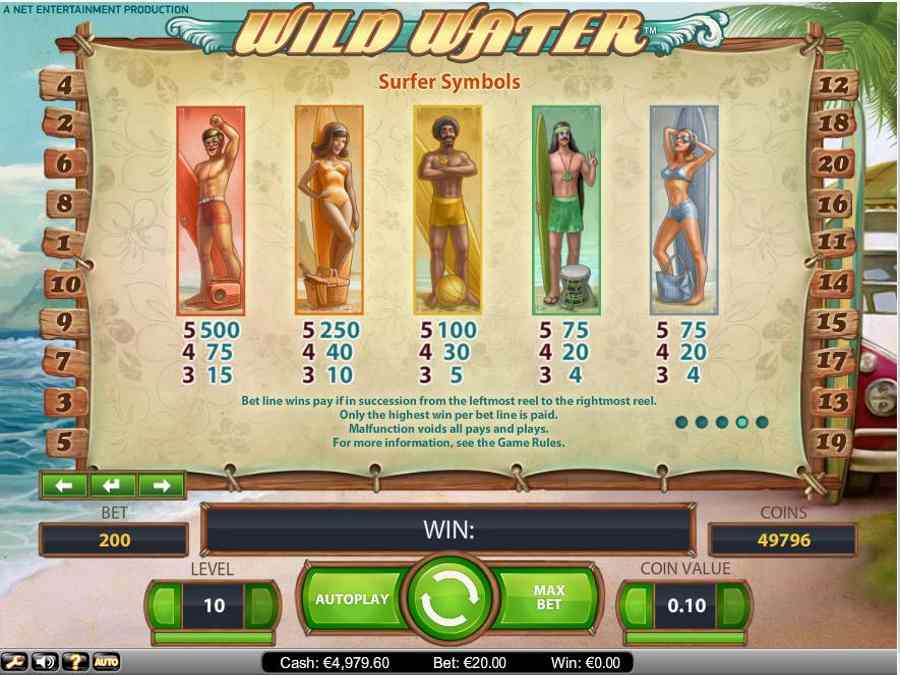 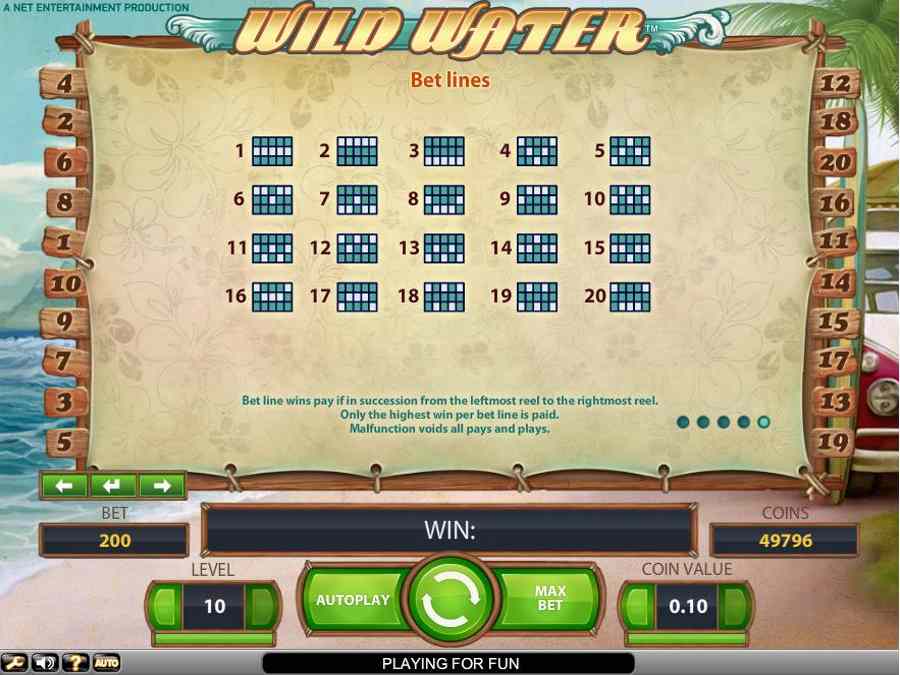 Wild Water is a non-progressive 5 reel 20 paylines video slot machine game from net entertainment, it has a Surfer theme, and comes with a Scatter, wild symbol, Multiplier, free spins and has a maximum jackpot win of $10,000.