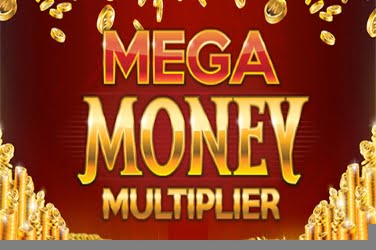 Microgaming have returned to the more traditional look with this latest slots release. So players will only find 3 reels rather than the usual 5 which they may have become accustomed too. These are encased in an ornate silver and gold frame which is set upon a deep red patterned background. Players can keep a track of their winnings at the top of the screen while the Control Panel is beneath the reels.

All the graphics that have been used are crisp and clear whether players are using a Desktop, Tablet, or Mobile device to access this slots game. The smoothness of play enjoyable while they are made to feel as if in a busy casino due to the sound effects that have been added.

Although the Mega Money Multiplier slots game has a rather basic format if does offer players the chance of increasing their winnings by up to 10x with the various Wilds that Microgaming online casinos have included in its design. Therefore making it an appealing game to many players from around the globe who appreciate the games classy appearance while they watch their jackpot balance grow.

There are just 5 main symbols in this slots which may remind some players of the old styled games from years gone by. However any combination of these can reward players with small regular wins to be added to their initial stake.

Players can find a Red 7 and a Blue 7 symbol across the games 3 reels. In addition there are the “Bar” symbols which can land as a single, double or treble during this slots game. All providing numerous chances for players to create a winning combination.

Wild – various Multipliers are used as the Wild symbols in this slots format and can provide players with some big wins if they land. Only found on the 2nd reel players may be lucky enough to land a 3x, 4x or 5x Multiplier which can increase their winnings.

However there is also the 2x Multiplier that can appear on any of the 3 reels and also plays a part if the Bonus Feature is activated.

Wild Multipliers Re-spin – should any 2 Multipliers be found on the central reel during a spin then players will see this reel become “frozen” while a 1x Re-Spins is awarded. This allows the opportunity for a further Multiplier Wild landing on the 1st or 3rd reel. Should this happen then players will benefit from all the Multiplier amounts being added to their jackpot balance. So if the Wilds fall in the players favor they can take advantage of up to 10x their wager which is certainly something which is proving popular with numerous players who enjoy online casinos.

The first players must do is to decide how much to wager before they can set the 3 reels of this slots game to spin. As there are 9 structured pay lines Microgaming have ensured that both low and high rollers can take advantage of their latest release. For those on a limited budget they can wager just 0.15 with each spin of the reels. However for players who want to maximize on their initial stake as much as 150.00 can be placed.

This is a Medium variance game that will provide regular small pay outs to be added to the players balance. Unfortunately some regulars to online casinos may find it rather dull as the only Bonus Feature comes with the 4x Wild symbols. Yet with the Multipliers that these provide there are still plenty of chances for players to increase the amount they can claim at the end of the game.

Due to the fact that this is a slow game with no entertaining Mini-Games or Free Spins to provide more of a thrill players can use the Auto Play button. Leaving the reels to spin automatically while they are doing other things. As the pay outs are awarded often they can return to a decent gain on the wager they set. And if the Multiplier Wilds keep landing on the 3 reels players can expect an even bigger win.

Available in Microgaming online casinos the Mega Money Multipliers has been attracting players worldwide since its release in April 2017. With its elegant look and RTP of 96% this is definitely a slots game that needs checking out. 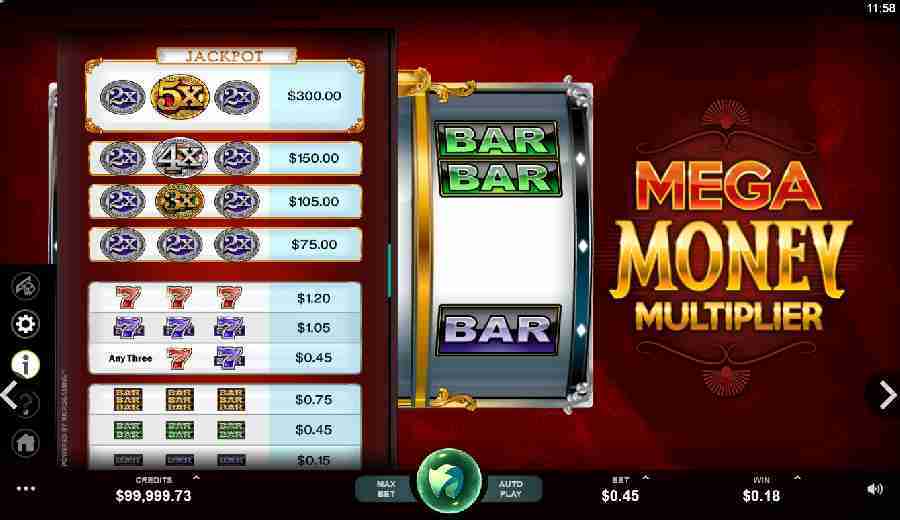 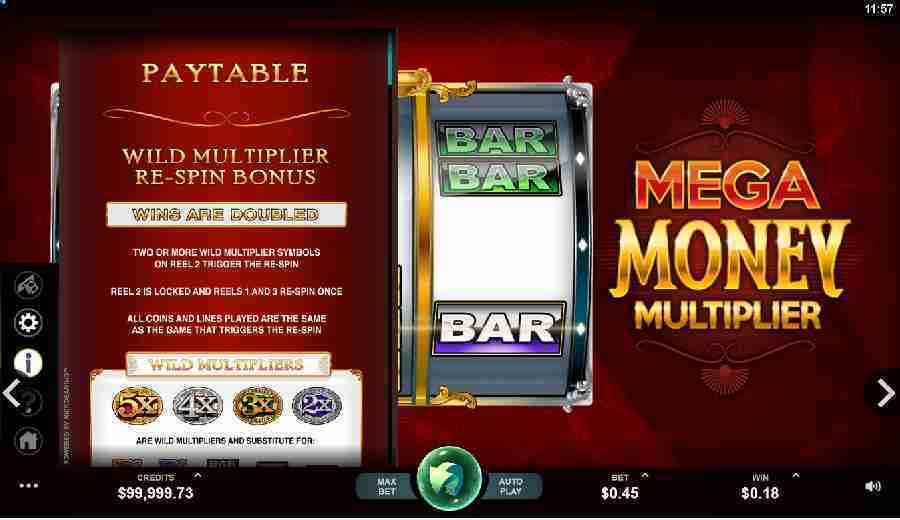 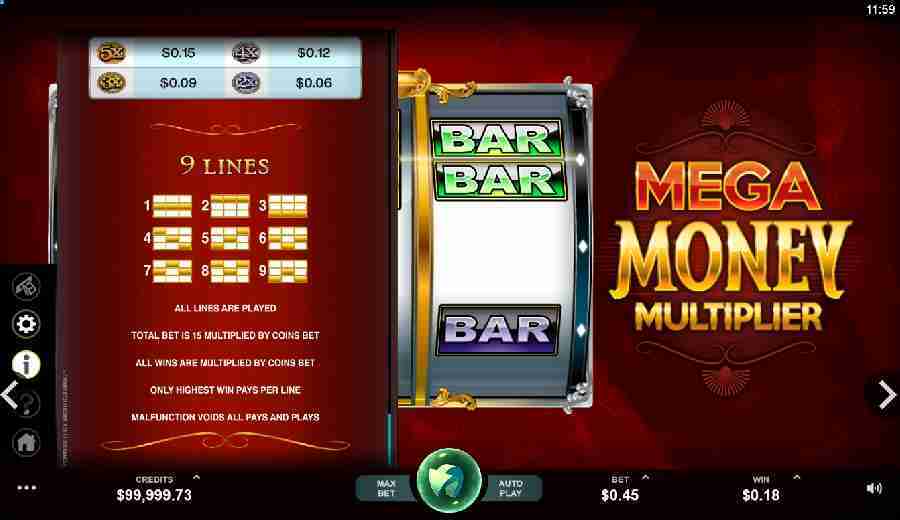 Mega Money Multiplier is a 3 reel, 9 payline, classic slot game from microgaming. it has a traditional classic theme and the game features, Multiplier, Free Re-spins a maximum jackpot win of $100.000